$5.- of every sold T-Shirt goes to Ellie Germanovs Project. With every $200.- we adopt a Manta trough Marine Megafauna Foundation and one of our Manta Customer can win the adoption. 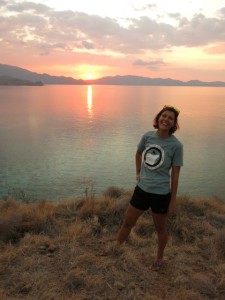 The goal of the project “Microplastics & Megafauna” headed by Marine Megafaua Foundation’s and Murdoch University, Western Australia PhD candidate, Elitza  “Ellie” Germanov is to provide an assessment on the implication of marine debris on threatened plankton-feeders, focusing on manta rays (Manta alfredi) and whale sharks (Rhincodon typus) in Indonesia. With additional funding the project has the opportunity to expand to incorporate comparative analysis in other regions including the South Eastern African coast and the Philippines and to include Manta birostris and Mobula species.Marine debris is currently ranked high on the list of threats to manta rays; however, no formal studies to date have attempted to quantify the threat level. As filter feeders, known at times to feed at the surface-water interface, where most buoyant plastics are found, manta rays are at risk of ingesting small pieces of plastic AKA microplastics. As plastics are known to concentrate organic contaminants or persistent organic pollutants such as DDTs and PCBs there is a possibility that manta rays and other large filter feeders are accumulating these toxins in their tissues. Very limited information currently exists on the implications of microplastics on large marine filter feeders, which often are often Vulnerable species of economical and world-heritage importance, and its through this project the hope is to contribute to closing this knowledge gap.

The main objectives of the research using a multi-disciplinary approach are to:

Shopping cart
There are no products in the cart!
Continue shopping